Not a member ? Register here!

Displaying beautifully crafted and instantly recognisable iCandy curves, the brand new Raspberry forms part of the much anticipated 2018 collection. The lightweight pushchair from the iCandy range has now been meticulously refined, fresh for a new generation. With over 50 updates, the iCandy’s Raspberry’s mandate is to once more transform city living for parents around the world.

Marketing for the iCandy Raspberry is now in full flow, with social assets being deployed over February, stockist artwork now in stores, and excitement growing for the future ahead. What’s more, in an iCandy first, the brand new Raspberry is the star of an exclusive television commercial, which will commence airing today for one month. This TV advert once more underlines the broadening appeal of iCandy pushchairs, and demonstrates the considerable efforts put behind every product to make sure it’s a success. With all iCandy pushchairs taking two years to arrive on the market from conception to completion, it is only right that the marketing reflects this same level of dedication and care.

The advert, entitled ‘Own The City’ follows city life for a young family, highlighting the ease at which the lightweight, urban stroller effortlessly handles its surroundings. The couple begin in central London, easily navigating the busy streets of London in part due to its lightweight nature and independent suspension. The couple then use the Raspberry to travel to the airport via taxi, demonstrating the ease of using public transportation with the stroller, before arriving at Stansted where the family adventure will continue with the Raspberry by their side.

The commercial will feature on Sky channels through the Adsmart system from February the 1st to the 28th. This is a particularly smart move, the Adsmart system ensures that the advert is only targeting those Sky subscribers who are expecting a baby. This is another example of how iCandy utilise the latest technology to revolutionise how they market their pushchairs. The Adsmart system will ensure that there is no wastage of media, it will help form the basis of an incredibly targeted marketing campaign. iCandy hope that their first TV commercial will drive further awareness of the iCandy Raspberry, and help educate parents on the city savvy stroller. 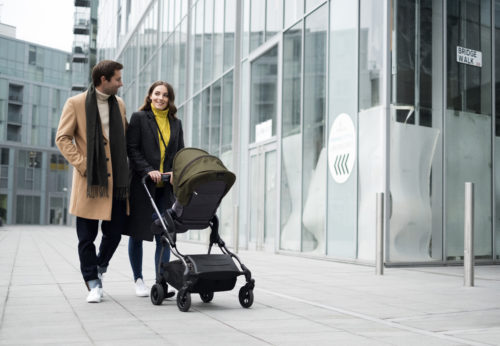